Mae’s Cafe… I used to drive past it all the time when I lived in Garden Grove. It’s situated right next to one of the most consistently busy In N Out Burger locations, and you can even see the Mae’s Cafe marquee from the 22 freeway! I was always curious about the unwavering blue and yellow sign and what lay beneath in the ordinary-looking restaurant. My best friend C was in town and wanted to meet up here to catch up over lunch — a divey diner, he called it. Mae’s Cafe is open 24/7 so he had plenty of high school memories of late-night meals with friends; maybe it was where all the cool kids hung out because I had never set foot in there until just last week.

When we first walked in, well… we were tackled by a bear hug from C. But then we were warmly welcomed by the woman behind the counter; a closer examination of her name tag revealed that she is in fact Mae of Mae’s Cafe! That was a great way to start our experience and I was looking forward to the food to come. I had done my research beforehand (read: looked up the menu online) and I knew I wanted one thing — THE MANLY MEAL. I kid, I kid, although that only $14 for steak, potatoes, AND a choice of pancakes, waffles, or French toast, my wallet was tempted to dive in. Challenge… not accepted.

Instead I went for my all-time favorite diner dish — steak and eggs. Mae’s offers a choice of sirloin, t-bone, New York steak, or porterhouse (or for the strong of heart, country fried), and I opted for the New York steak with my eggs sunny side up and runny. The steak arrived rare to my liking, though this particular cut was a tad chewy. Nothing a dip into luscious egg yolk couldn’t fix! These are all served with your choice of hash browns or lyonnaise (pan fried) potatoes as well as toast, English muffin, or biscuits & gravy. As you can see in the photos above, I went for the hash browns – extra crispy and a beautiful golden brown. Now my readers, I’ll bet you know me well enough by now that you can guess what I ordered for my bread accompaniment…. 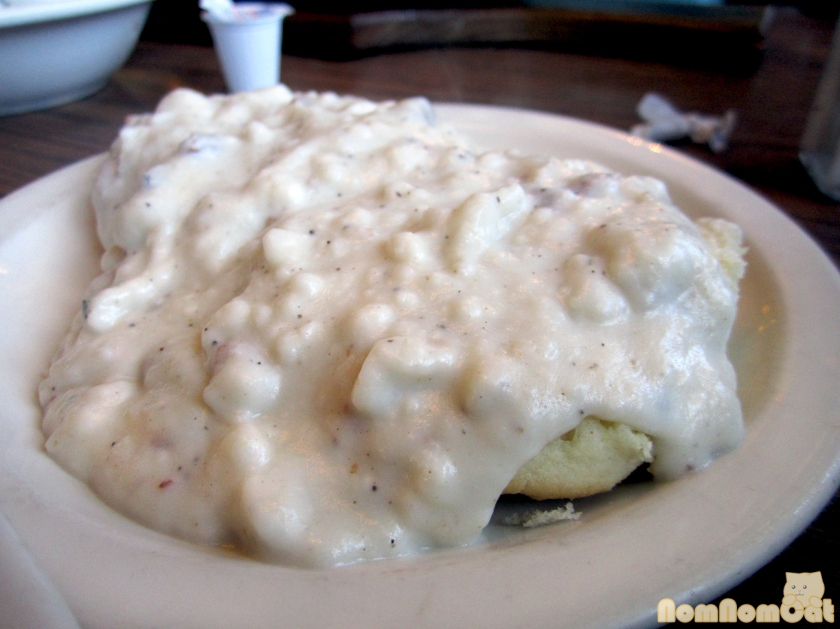 Not the prettiest plate in the world, the biscuits were absolutely drenched in a thick, white country-style gravy. The gravy was savory and hearty, but the texture was a bit odd — even visually you can tell it resembled cottage cheese. Still, the fluffy buttermilk biscuits underneath sopped up the all the flavors and were really comforting in a stick-to-your-ribs kind of way. 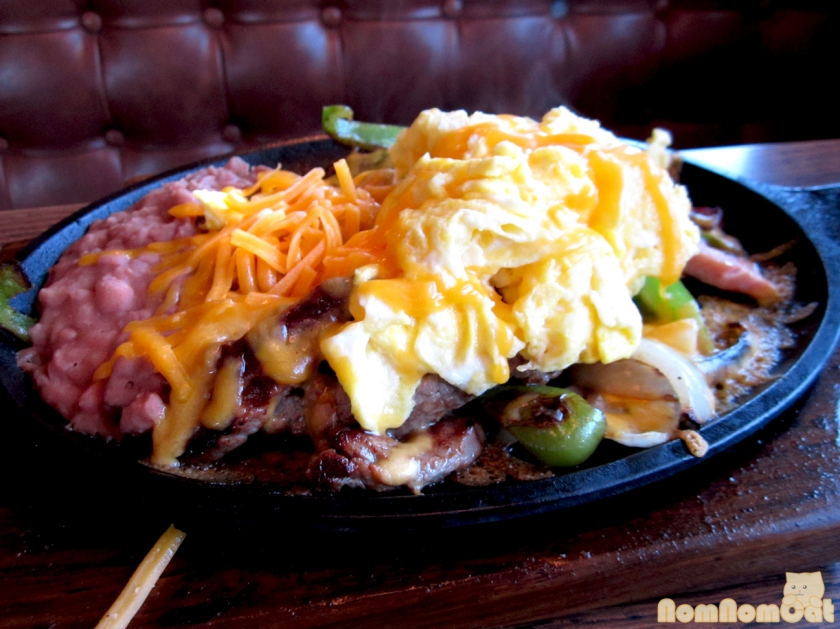 C ordered the breakfast fajitas — a hot skillet piled high with strips of steak, ham, onion, and bell peppers, and topped with a dollop of refried beans and mountain of cheesy scrambled eggs. It was a man-sized meal (though not the Manly Meal) served DIY with tortillas and salsa. C said it was difficult to choose between this and the John Wayne’s Favorite, but he seemed to have zero regrets as he dove into this sizzling platter. 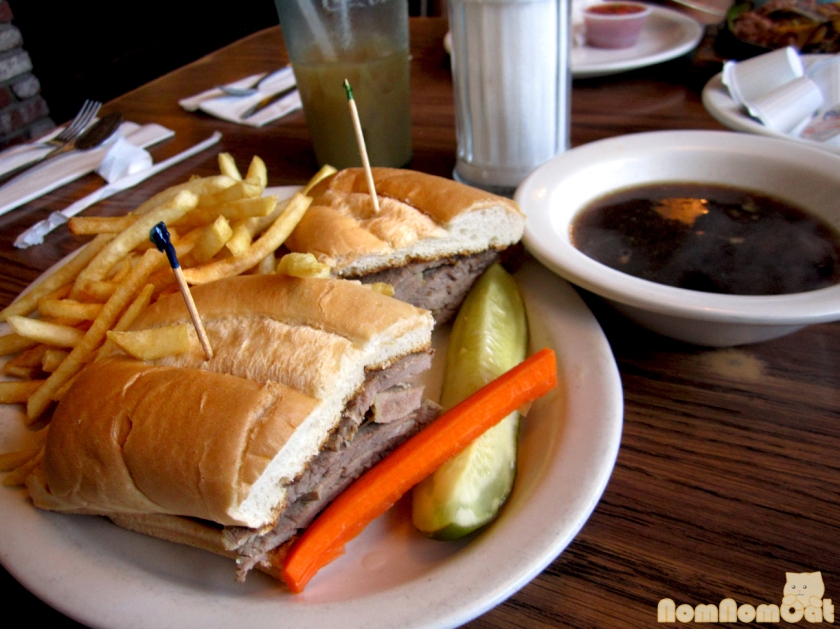 Martin was in a lunch-y mood and decided to go for Le French Dip. Because adding “le” makes it more French, I guess. The menu described it as “thinly sliced beef on a French roll, served with au jus dipping sauce,” but as we soon discovered, the beef slices were generously thick. They seemed to be a bit dry, so he let them marinate in the piping hot au jus which perked them up and made for a more enjoyable sandwich. The fries sounded crispy as Martin crunched next to me in the booth we shared, never offering me a single fry. :( The sandwich came with a pickle (reasonable) and a carrot stick (odd?).

The conclusion? It was a divey diner as promised. But the staff was no-nonsense yet attentive, the food was decent, the iced coffee was pretty good, and most importantly, it was a great place to share a booth with friends and enjoy a leisurely conversation over breakfast. Or lunch. Or dinner. Or any meal really, since they never close. Definitely better than Denny’s, that’s for sure!

Our trip to the Central Coast was wrought with visits to awesome places with hilariously awesome names. After our dinner at Crazy Sushi Fever in Atascadero, we woke up the next morning ready to continue our Central Coast adventure. First, we needed some fuel to start our day, and where better to brunch than a place called Hoover’s Beef Palace? Seriously.

Hoover’s Beef Palace, a quaint little greasy spoon just off the 101 freeway, is a down-to-earth, no-frills, country-style diner. A pit stop for many truckers and locals, it was the kind of place where I got some funny looks for taking pictures of my food. It was also the kind of place where about 1/4 of the menu was filled with “Meat & Eggs” plates. My kind of breakfast!

There’s nothing quite like diner coffee. Good ol’ basic black coffee, no fancy origins or special roasts, but most importantly, it didn’t have that gross acidic aftertaste. Sip on a cup o’ Joe while admiring the walls adorned with photos of county fair prized pigs, John Deere memorabilia, and portraits of cowboy hat wearing sheriffs (mayors? city officials? hard to say).

Martin shared a fascinating tidbit with me recently. Did you know that tri-tip roasts were originally made popular by the Central Coast? Since we were in the ‘hood, Martin decided to pick the West Coast’s contribution to barbecue for his meat & eggs. The steak was a bit chewy for my taste, but temperature (rare) was perfect and the seasoning was spot on.

I decided to go with the rib eye steak and eggs. Mine too was cooked perfectly rare and seasoned generously with a simple combination of garlic salt and black pepper. Just like Dad used to make! The farm fresh eggs were beautiful sunny side up with their golden runny yolks. The hash browns were crispy they way I like them. Just when I thought I couldn’t be happier….

… our side orders of biscuits & gravy arrived! We each got a half order that came alongside our meat & eggs plates, but it was a ton of food and we could have easily shared one. The white gravy had bits of sausage sprinkled throughout and the buttermilk biscuits hidden underneath soaked up all of that hearty goodness. I had a soft spot for Southern comfort food and these biscuits and gravy really hit the spot.

So if you’re visiting SLO County, be sure to swing by Hoover’s Beef Palace for a satisfying rancher’s breakfast before heading up to Paso Robles for wine tasting or nearby cities for fruit picking. Don’t be alarmed if people give us city folks funny looks for “checking in” on our phones or snapping a photo or two. The regulars seem to know exactly what they want and come here for the large portions and small town vibe.

We had just gotten into town after a long drive from LA. After we checked into our hotel and freshened up, we wandered over to Paris. Win some, lose some, and then, around 4am, the hunger struck. We asked one of the friendly drink girls where we could find steak and eggs. She hailed over this important-looking man in a suit (probably a floor man or pit boss) and announced “Please escort these lovely ladies to the steak and eggs!”

We wove through the casino floor to the entrance of Sugar Factory American Brasserie, the restaurant side of the colorful candy shop. Tucked away in a secluded corner, we never would have known that it was open at that hour, let alone that it would be serving one of my favorite comfort foods 24 hours a day.

After we were seated, we were greeted by the ever-friendly Skip. We browsed through the extensive menu over ginger ale. The late-night (12am-6am) menu features selections from the breakfast dishes, pizzas, appetizers, and pages of fascinatingly colorful goblets of cocktails. 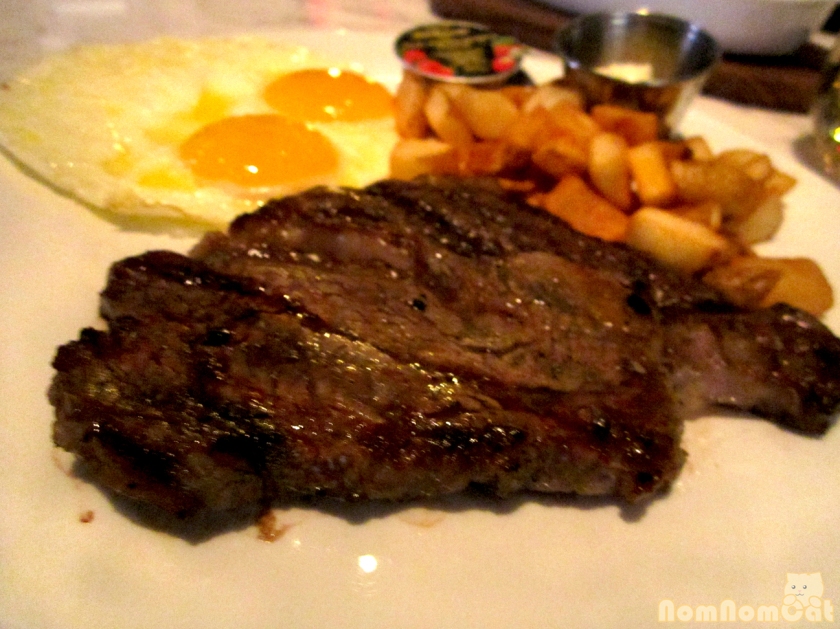 Of course, I had to get the Sugar Factory’s Steak and Eggs — grilled rib-eye steak accompanied by two eggs and a bearnaise sauce. Sunny side up eggs, tender and juicy rare steak… I was in heaven! All of the dishes in the Eggs & Omelets section are served with home fries and your choice of toast. White, wheat, or cranberry challah. Wait, what? Cranberry challah?!

That’s right – cranberry challah. The delicious, Jewish egg bread was dressed up with dried cranberries, although it tasted suspiciously buttery like a brioche. Maybe it was slathered with butter before it was toasted. It was through a conversation over the word ‘challah’ that we found out Skip had lived and worked in LA for a while, at the infamous Canter’s Deli. What a small world!

N has a soft spot for mac and cheese, so she went for the Oven Baked – macaroni, cheddar cheese sauce, buttered breadcrumbs. She looked so happy digging into the piping hot gratin dish full of rich, creamy, and decadent goodness. Skip brought out some hot sauce and she was all set! 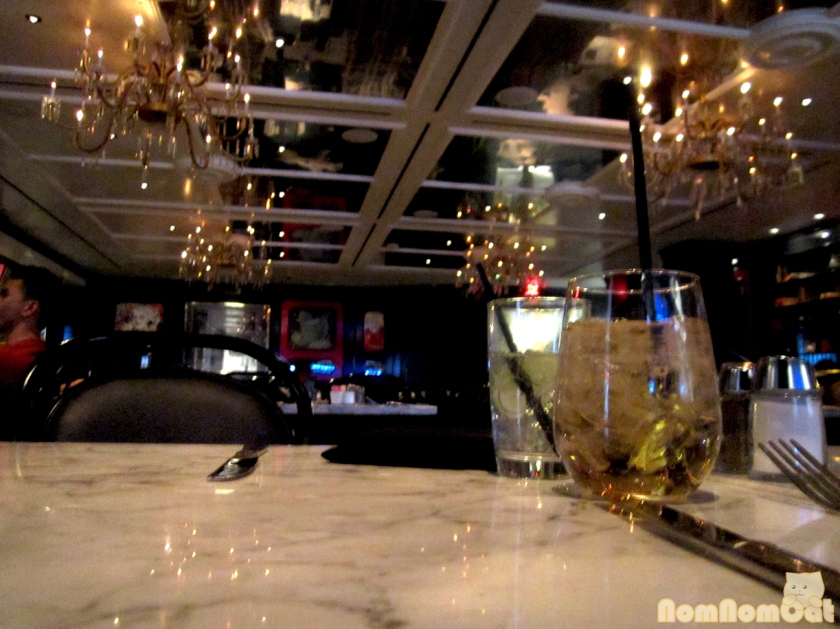 Sure, the food was a bit pricey ($18 steak and eggs, $17 mac & cheese), but they really hit the spot and were conveniently available 24 hours a day. We were also pleasantly surprised by Skip’s amicable service; I’m sure it takes a certain personality to be able to serve obnoxious late-night drunk people with smiles. Next time you’re in Vegas and the munchies hit, be sure to swing by Sugar Factory!