It’s finally here – All Hallows’ Eve! One of my favorite holidays of the year! I hope you’ve got your pumpkins carved, costumes donned, candy stocked, and witches’ hats ready. Oh, you don’t have a witch’s hat? Have no fear! These easy-to-assemble snacks are here to save the day! 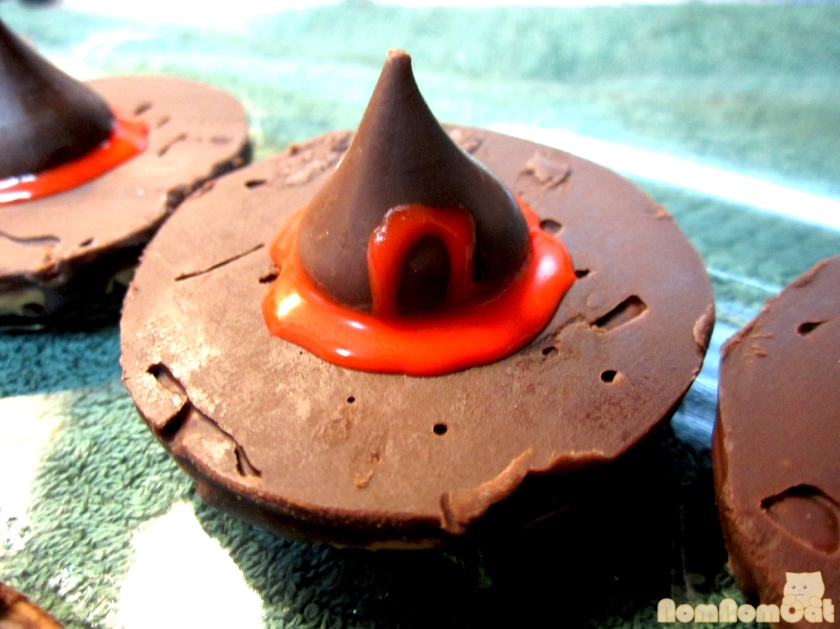 Every holiday, I love to browse the recipes on AllRecipes.com for seasonal ideas that had a fun and festive flair to the party table. I always see all sorts of creative ideas in varying from complicated made-from-scratch confections to boxed cake mix tweaks and skill levels ranging from kid-friendly to formal culinary education recommended. But these witches’ hats are incredibly easy and I thought they are oh so clever! Plus I welcome any excuse to buy a package of Fudge Stripes cookies — the lunchbox holy grail of my childhood. 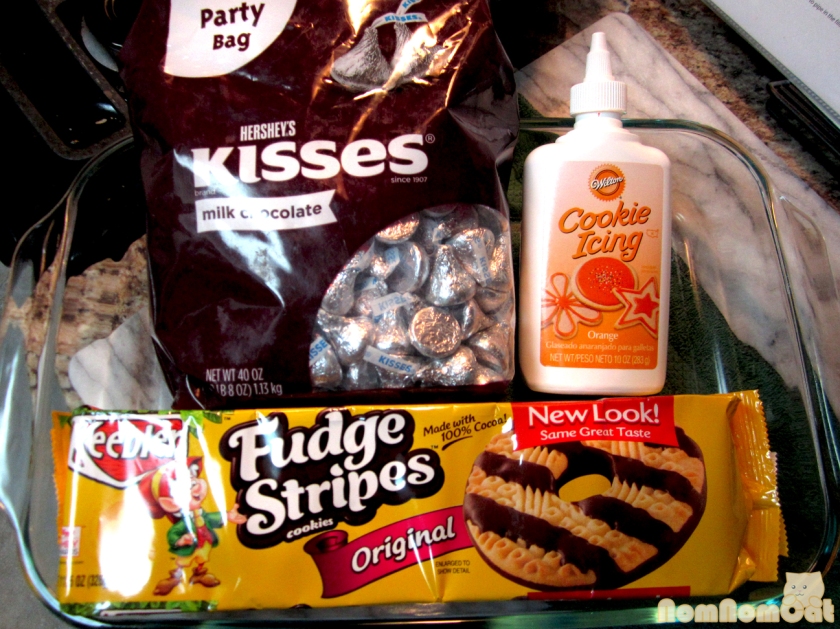 Orange icing — I used a bottle of Wilton’s Cookie Icing, but you can buy cake decorating gel or whip up some homemade royal icing

(Adapted from this AllRecipes.com recipe) 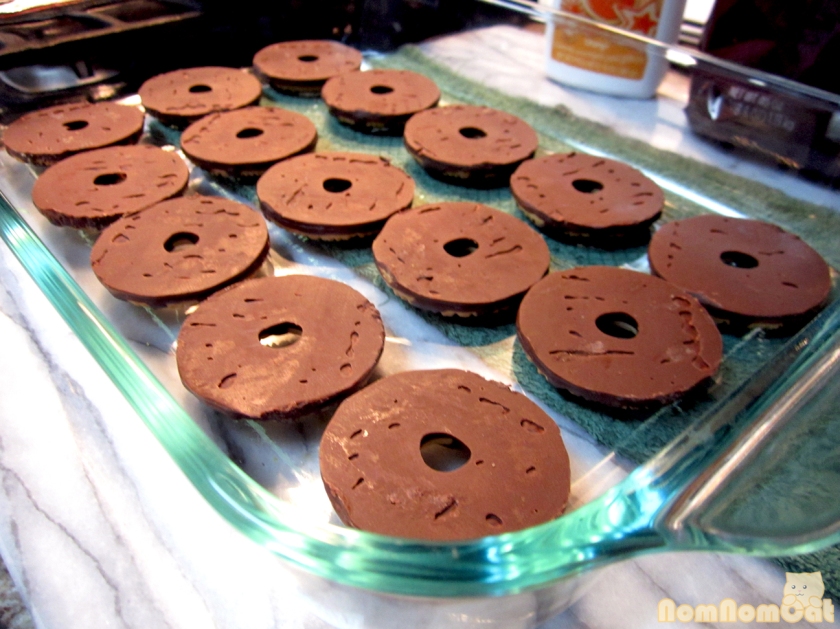 Step 1: Arrange your cookies on a tray or baking sheet striped side down. I put mine in a 9×13 Pyrex dish which came with a lid (the height is perfect to keep the hats intact). 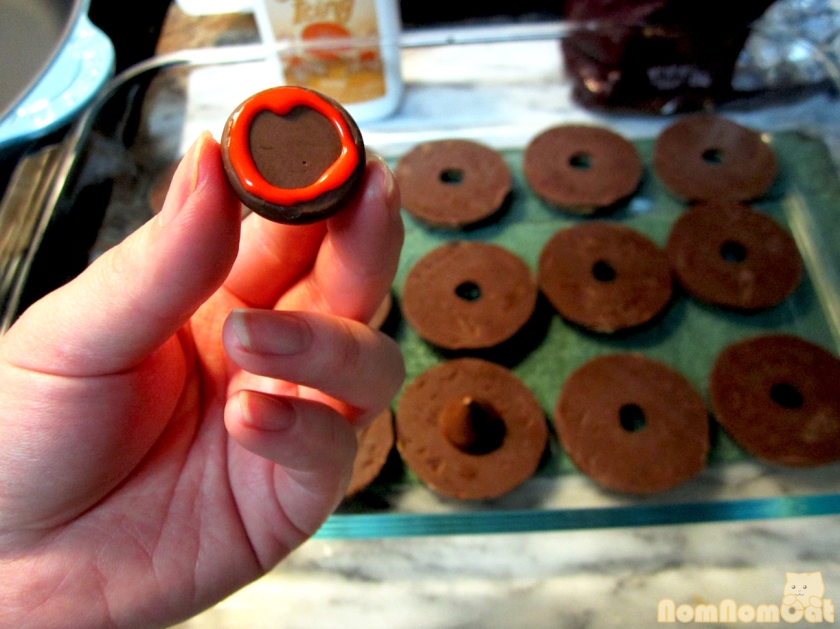 Pipe the frosting onto a Kiss

Step 2: if needed, transfer the icing to piping bag with a small round decorating tip (I used a No. 2 round). Pipe around the edges of the bottom of a Kiss. 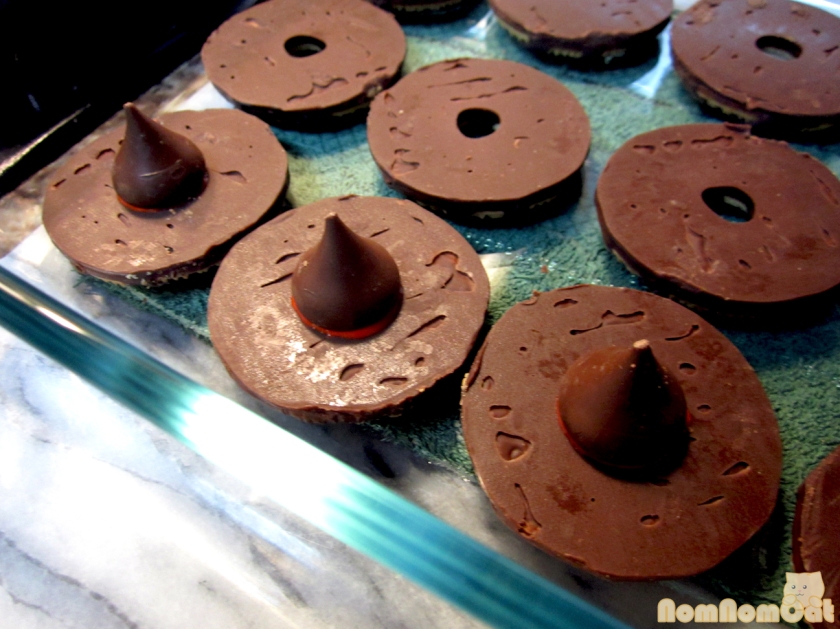 Step 3: Affix the Kiss to the Cookie. The icing will harden and act as an adhesive. If some peeks out on the edges, don’t worry — we’ll decorate over this later. 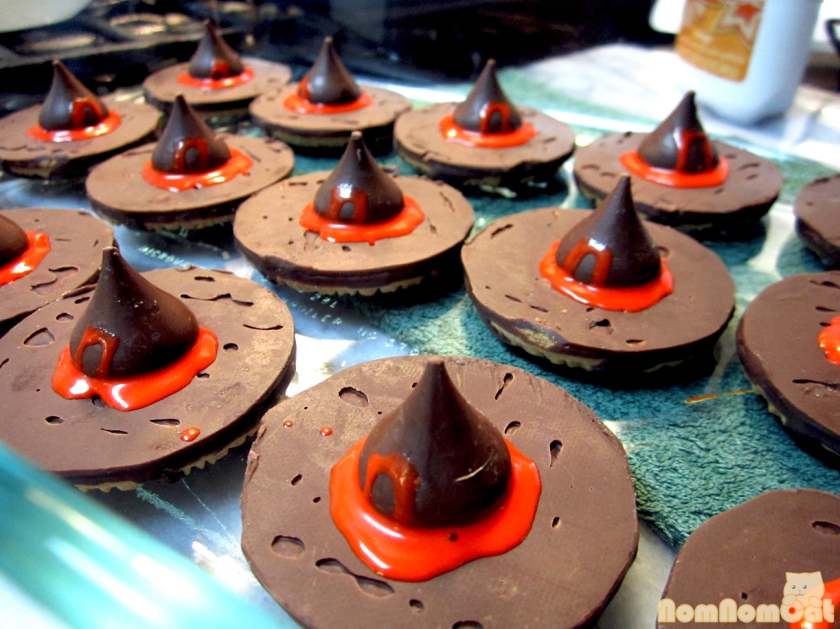 Step 4: Pipe around the base of the Kiss to create a “belt” or “ribbon” on the hat. Get creative. I added little “buckles” as well, though I think they ended up looking a bit pilgrim-like.

Let the icing harden. Royal icing (and cookie icing) will take about an hour. Plate up for the party and amaze your guests with the simplicity and innovative vision of assembling these store-bought goodies.

Wishing you all a safe and happy Halloween!

We love having friends over for food and drinks and merriment, so a summer barbecue for Independence Day was inevitable. As we planned out our spread, we knew we wanted to serve up our copycat Father’s Office burgers, zesty tequila-lime chicken (recipe to come), and shrimp. Hm. Shrimp. Our brains were riddled with question marks as to the marinade and the idea of “Oh, butter, lemon, and herbs will be fine… it’s a classic combination!” relentlessly gripped my train of thought. But with our other two fancified proteins on the menu, we wanted the shrimp to stand out too. Cue, sriracha. 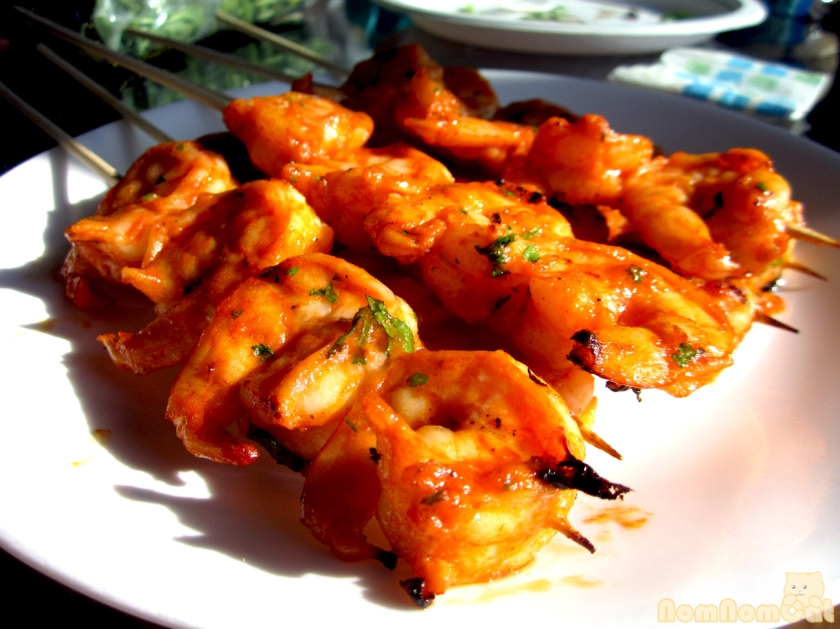 Sriracha. An Asian bottled hot sauce made popular here in the States by David Tran of Huy Fong Foods, sriracha has been a critical household ingredient in my family since before I was born. My parents always had a bottle sitting in the refrigerator, always the Huy Fong one with the rooster and the iconic green cap. Known in Vietnamese as tương ớt (or “pepper sauce”), I only ate sriracha with pho and occasionally to spice up other Asian dishes like fried rice or non-pho noodle soups. It wasn’t until I moved to LA for college that I even saw a bottle of sriracha anywhere other than an Asian restaurant. In fact, it was EVERYWHERE – the dining halls, the Mexican taco trucks, the “international” section of Ralphs. All of my friends, regardless of their ethnicity, slathered sriracha over everything. Have you ever tried sriracha in lieu of ketchup for dipping French fries? IT ROCKS. 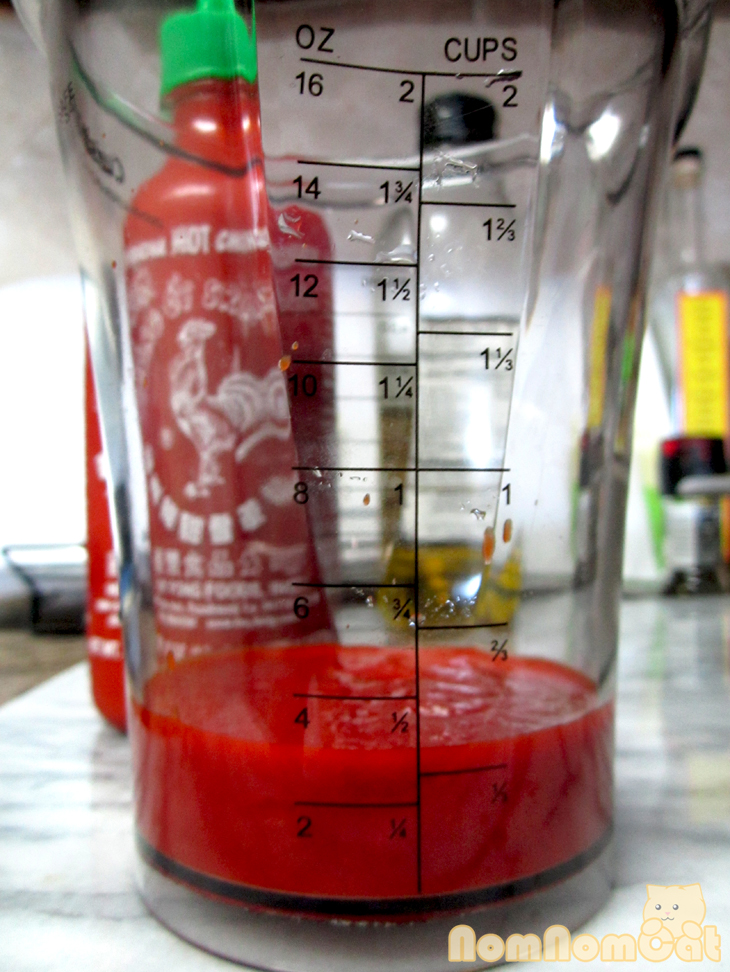 The iconic plastic bottle with the rooster and green cap (accept no substitutes!)

Huy Fong Foods sells out of every batch they produce and recently expanded their facilities from Rosemead (near where Martin grew up and would smell the scent of brewing peppers wafting through the neighboring streets) to a 23-acre factory in Irwindale… it warms my heart to see the success of a company with such humble beginnings (the family immigrated during the Vietnam War, just as my parents had). There’s even a sriracha documentary coming out soon; I’m expecting a Jiro Dreams of Sushi of the hot sauce world. 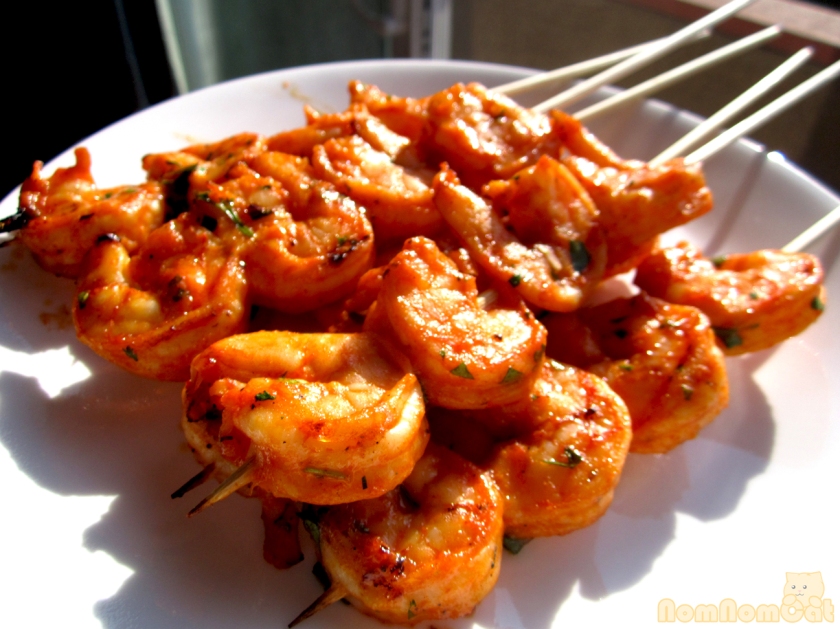 But back to the barbecue. Fortunately, our friends at Foodbeast resurrected this awesome recipe from Helen at Food52, and we found it on our Facebook news feed not a moment too soon. It was a huge hit at the party and definitely a keeper for future cookouts. 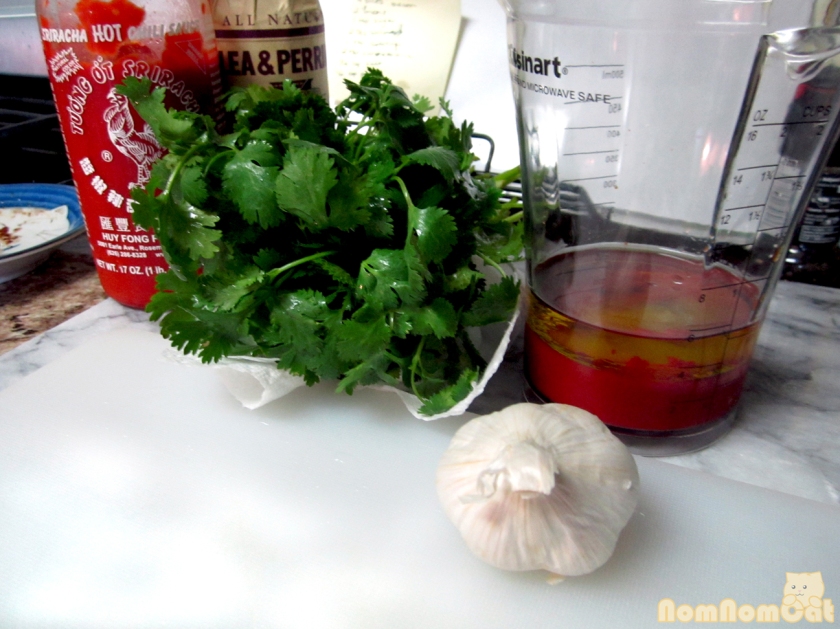 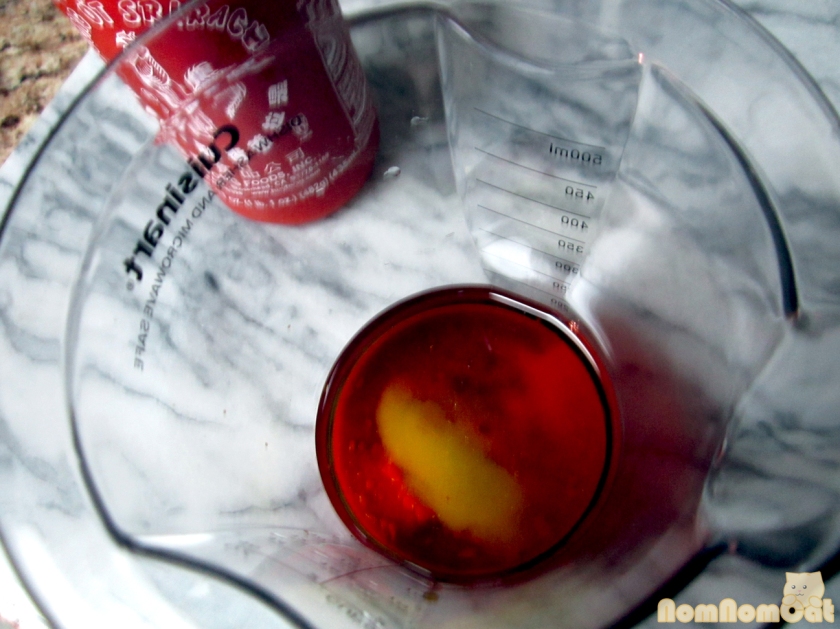 The Marinade – At the Beginning

In small bowl (or measuring cup – I like to minimize dirty dishes), whisk together the first six ingredients, making sure to bruise the garlic pieces as you mix. Let the marinade mixture sit while you work on the shrimp. 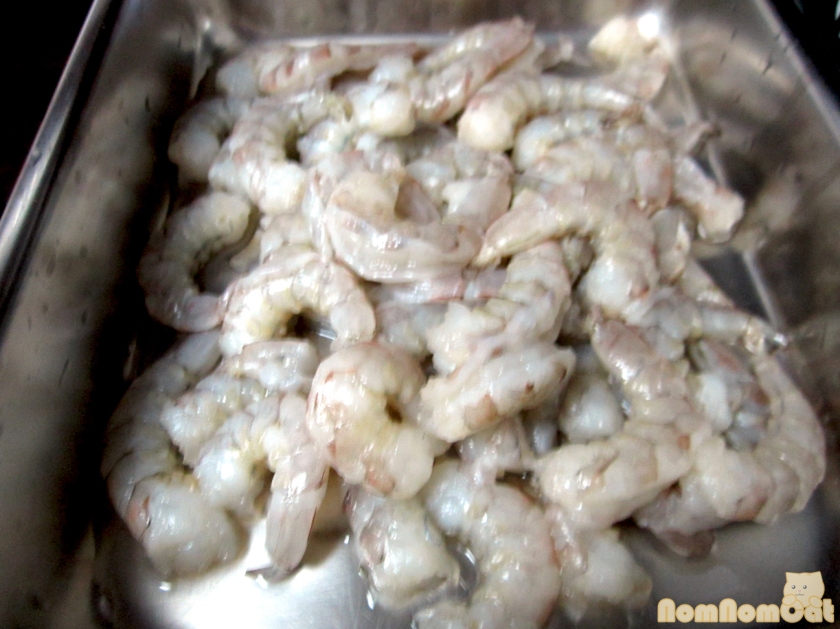 Clean the veins from the shrimp and peel them under cold water. Tails on or off – that’s up to you. I preferred them tail-off for ease of devouring these morsels whole. 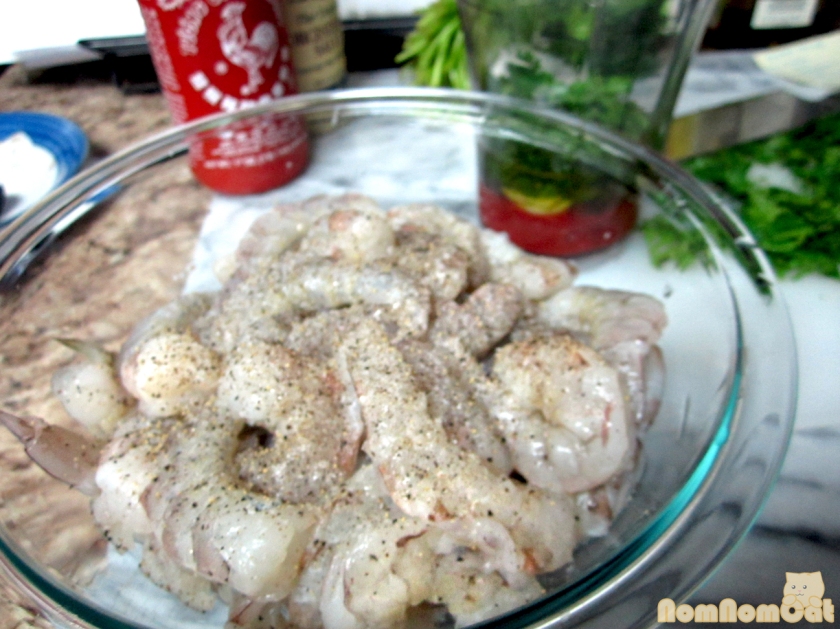 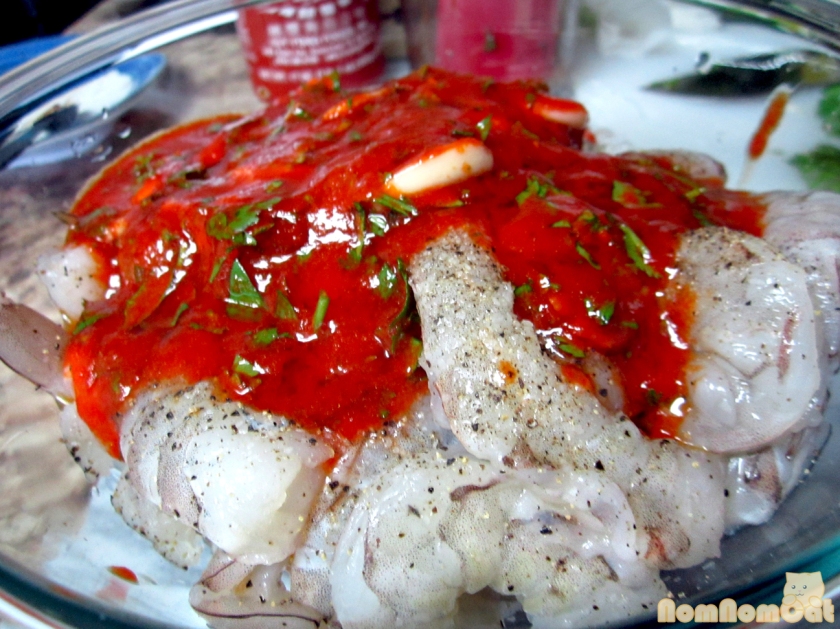 Look at the stunning marinade!

Pour the marinade over (scrape every last drop!) and mix well to combine. Cover and refrigerate for at least 2 hours. The marinade (i.e. the flavor) clings well to the shrimp when it comes time to grilling, so it’s OK if you don’t quite have 2 hours to spare. 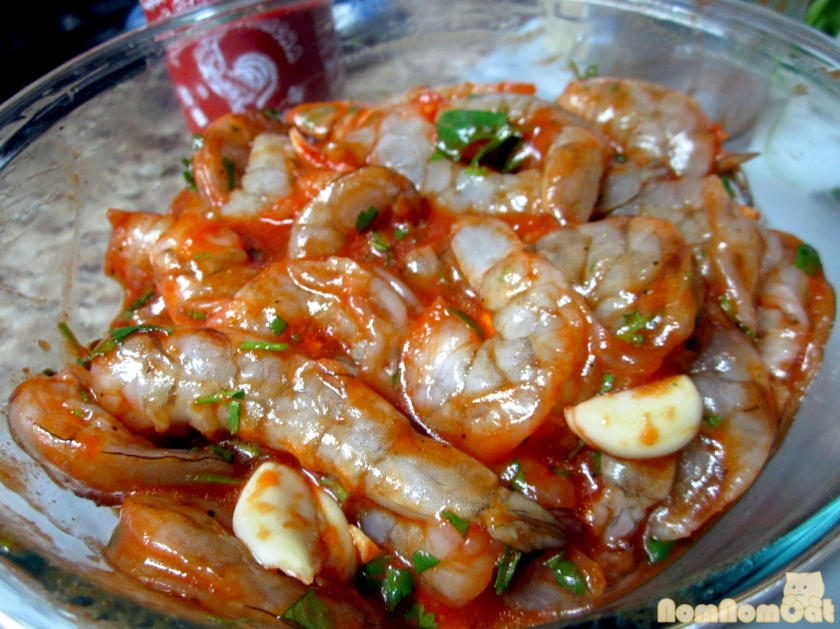 You could almost hear the shrimp soaking in all that flavor!

About an hour before grill time, soak some bamboo skewers in water; this keeps them from burning to a crisp over the hot coals. I set out a baking sheet on a counter I wasn’t using, spread out the skewers in a single layer, and then poured cold water over them. 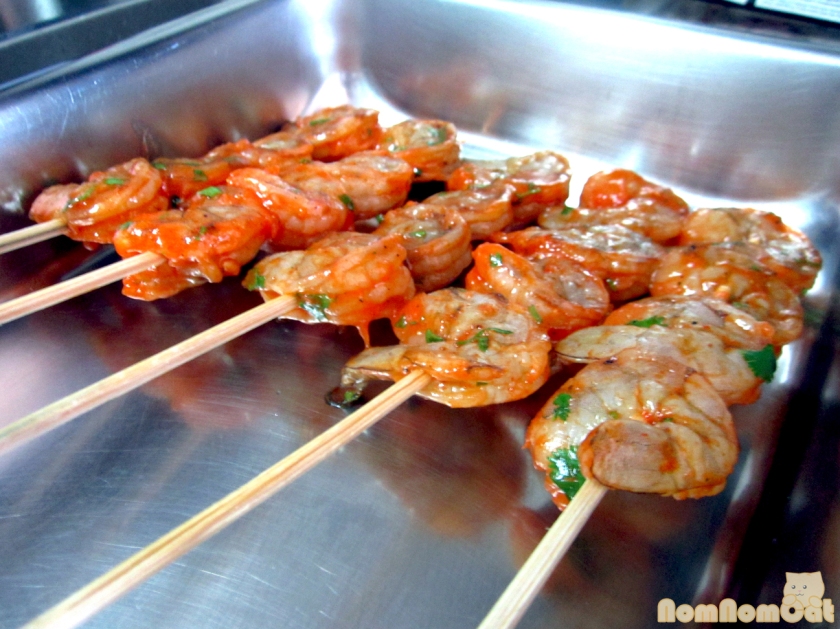 When it’s time, set up the grill and get it all nice and hot. Meanwhile, thread the shrimp on the soaked skewers. We have a small grilling surface, so I did 4 per skewer. You may want to wear food-safe gloves… I didn’t and my slightly burning fingertips immediately regretted that decision. 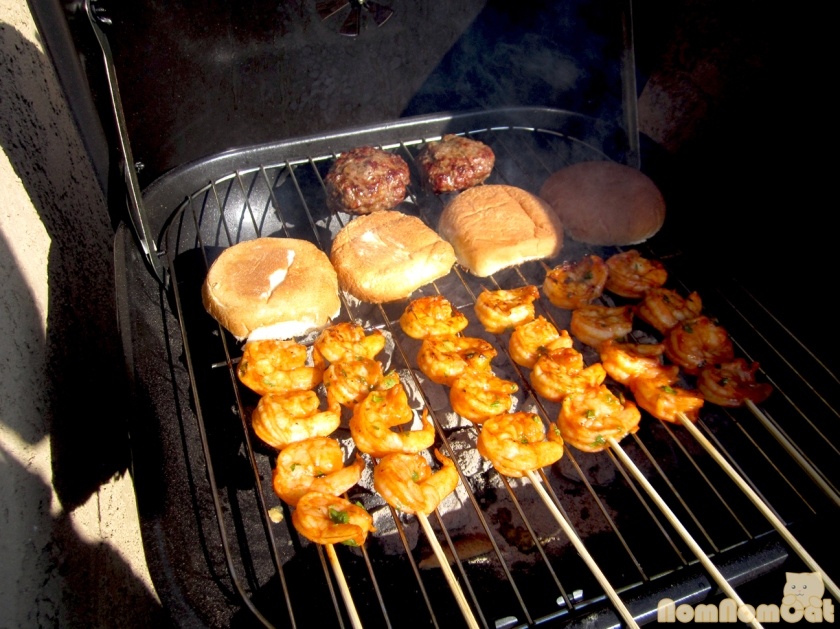 Shrimp on the Barbie

Shrimp are an excellent party food since they cook so quickly. Just 2-3 minutes per side on a hot grill and they will be perfectly opaque and juicy. Serve them up and wait for the satisfying “yums” followed by the telltale “sss” as your guests’ varying levels of tolerance for spiciness are put to the test. 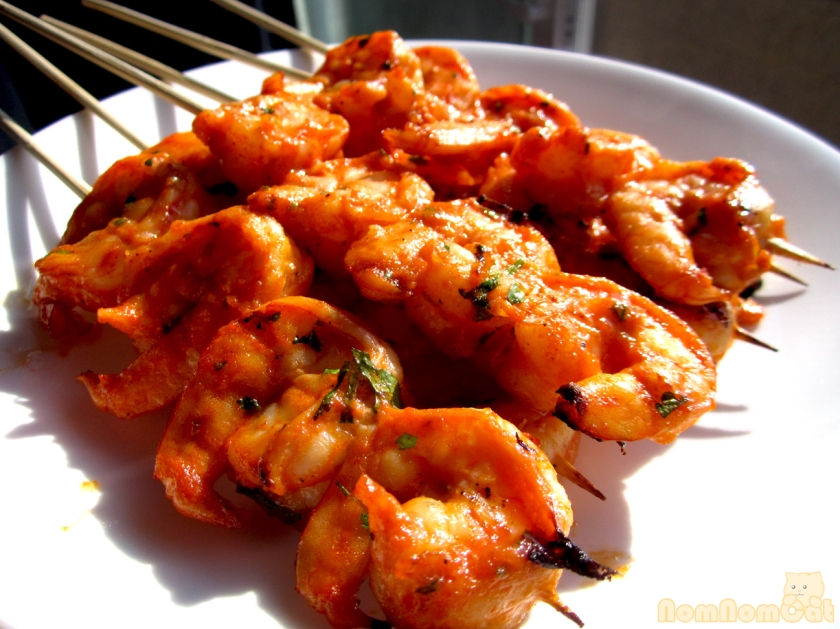 There are plenty of hot sauce marinated shrimp recipes out there, and even ones that also feature the beloved sriracha, but many only call for mere tablespoons of the stuff for the same quantity of shrimp. It’s no surprise then that Helen of Food52 was awarded “Best Shrimp Recipe” for this stellar recipe that dares to really pack a punch. Give it a whirl for your next summer barbecue – it’s sure to be a crowd-pleaser! (And if you liked this recipe, check out her grilled lamb, also a winner on Food52.) 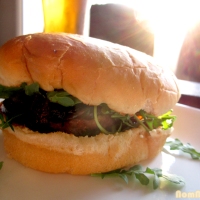 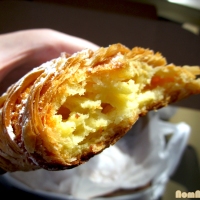 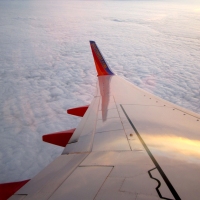 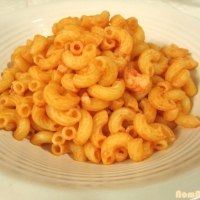 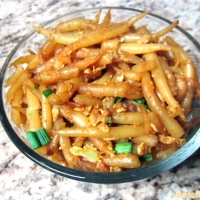