Tucked into a cozy corner of the Japan Village Plaza (日本村プラザ) of Little Tokyo in Downtown LA are all sorts of bakeries, cafes, souvenir vendors, even mochi ice cream. Our most recent discovery, however, was Cafe Dulce. We just could not resist the bright yellow umbrellas beckoning us inside.

And once inside, I was floored by the baked goods on display. Martin pulled me over to the glass case and pointed out one magical word: BACON. (Which of course, immediately brought to mind that good ol’ commercial for dog treats… IT’S BACON!!!!)

That’s right, folks. Cafe Dulce is home to a delicious, salty-sweet bacon doughnut. Available in both whole doughnuts and doughnut holes, the fluffy fried dough is topped with a basic white sugar icing and sprinkled generously with flecks of smoky bacon. Though it was the first to catch my eye, it was not the only impressive item in the display case…

The Glass Display of Goodies

Behold the beautiful treats. I wanted to buy one of everything. Especially intriguing was that colorful tray on the second shelf, filled with doughnut holes topped with Fruity Pebbles cereal. What’ll they think of next??

Of course. Matcha-flavored brick toast. Brick toast is traditionally a Taiwanese boba shop dessert consisting of a hefty slice of bread soaked in sweet syrup or condensed milk or other flavorings, served warm. Just seeing those two words brought back memories of driving out to Guppy’s Tea House in high school just to dig into a giant brick toast (and shaved ice, but that’s a story for another day). Since we were planning to bring a few doughnuts home, I ordered one of these as well to heat up later.

Dissecting the brick toast reveals a fluffy center and a crunchy exterior from the sugary glaze. The matcha flavor and gorgeous pale green color was present throughout the toast. We heated it up for just a few seconds in the microwave and it was good as new. I meant to eat only half but I polished that off with a quickness. Pictured above is the second half, the one I had fully intended to save for later. But, it was delicious and I have no regrets.

Ahh the bacon doughnut hole. We thought these little puffs of dough would be cuter and easier to portion-control than the full-sized doughnuts. Personally I think they photograph better as well. I loved the doughnut itself – light, fluffy, and not at all greasy. Like a little deep fried cloud. The icing was simple which helped the bacon stand out better (usually I see bacon doughnuts with a maple glaze). This was unadulterated sweet & meat goodness. The bacon could have been crunchier, but then again, I like my bacon so crispy that they crumble when you look at them. It was a nice little artery-clogging treat and certainly a great novelty item if you’re looking to pick up dessert to bring to a party. Give it a try – you just might like it! 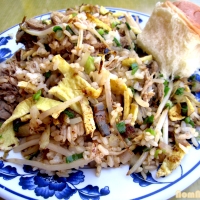